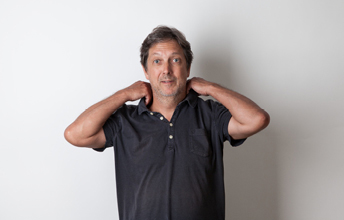 Aleš Najbrt (1962) is a Czech artist and graphic designer. He studied at the Academy of Arts, Architecture and Design in Prague from 1982 until 1988. In the early 1990s, he worked as the art director of the Reflex magazine and as editor of the Raut magazine. In 1994 he co-founded studio Najbrt and Lev, which affiliates prominent Czech designers. Together with his co-workers, he is the author of many brands and visual styles, film and theatre posters. Since 1995, he has co-operated with the Karlovy Vary film festival on its visual style. Aleš has received numerous awards, including the Grand Prix of the XVII. Brno Biennial in 1996, bronze medal of the The Tokyo Typedirectors Club, Czech Grand Design 2007, Popular Music Academy Award – Anděl 2003, several awards of the Czech Film and Television Academy for Best Movie Poster and Most Beautiful Czech Books.