Their rubber bodies, shocking motion-creations (with turtlenecks rolled up pretty damn high) and meticulously combed hair will surely redefine your view on the nature of art. Thomas & Ruhller – yin & yang, two sad clowns from the land of the tulip, jugglers of taste and artists of the future, where the difference between high and low doesn’t exist. Nederlandse kunst. Pure joy.

The template for the Thomas & Ruhller typeface was designed in 1989 and was originally hand drawn onto paper cards using ink. The typeface was primarily created for use in advertising, promoting and marketing the two performers’ tours and shows. The first digitised version contained basic characters and numbers, requisite diacritics and punctuation. The font was re-digitised for Briefcase and was sup­plemented with additional glyphs and alternative characters.

Thomas & Ruhller is a display type inspired by theatre mastery and transforms sensual stage movement into two dimensions. Indi­vidual letters refer to famous figures from theatre and thus constitute a sort of “best of” theatre performance, which you can awaken on your compu­ter in each new text or project. Asymmetric serifs create suspense in the text, the oval counters of the “A” and “V” are replaced with precise diagonals, the wavy “X” symbolises interlocked limbs spastic fig­ures, elegant poses, artistic com­positions.
A novel approach to the construction of the Latin typeface results in a variable poster typeface, supported by a number of alternates, available through the respective OpenType function. The character set comprises a collection of uppercases and first rate diacritics, a set of numer­als and special characters, allow­ing for the typesetting of circus posters, artistic pamphlets, theatre programs and book covers in most Mid-European languages. Kunst heeft om te winnen. 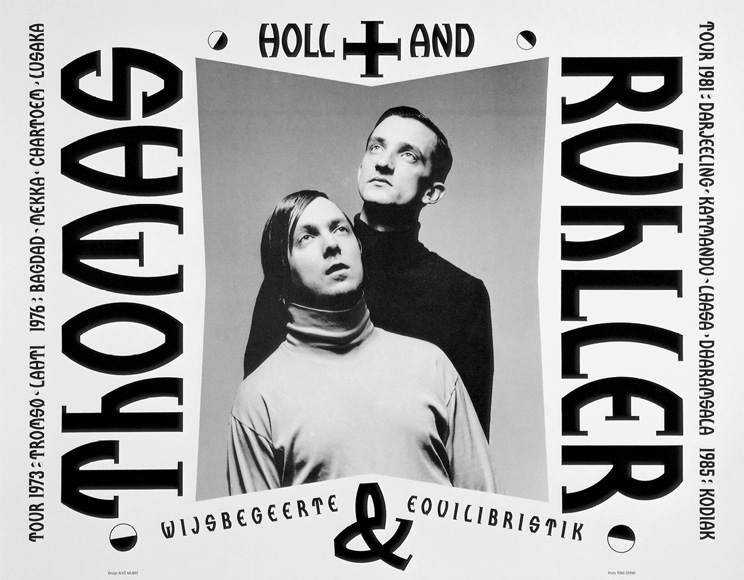 Poster for a tour of over thirty countries around the world. Thomas & Ruhller have been around for thirty years now and their show has sold out venues in many countries throughout the world. Aleš Najbrt designed all the posters, invitations and programmes for these fine equilibrists. Photo Tono Stano; 1990. 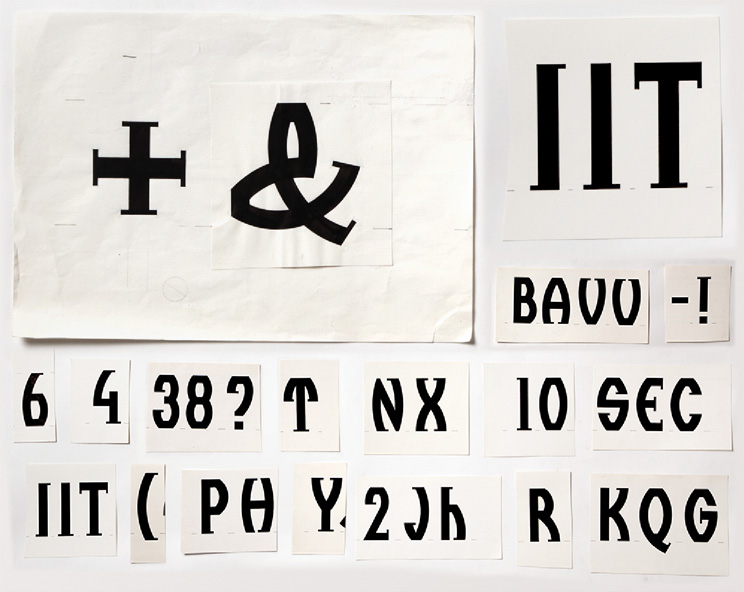 The template for the Thomas & Ruhller typeface was designed in 1989 and was originally hand drawn onto paper cards using ink. The typeface was primarily created for use in advertising, promoting and marketing the two performers’ tours and shows. 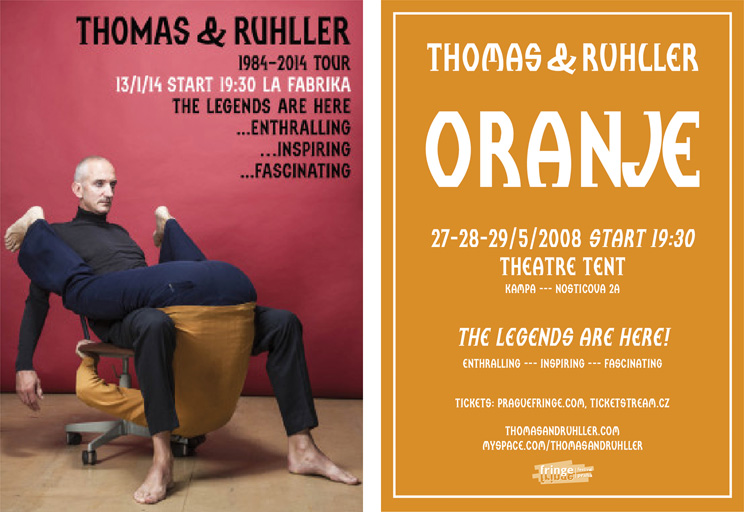 The first performance Thomas & Ruhller of the jubilee 30 year will be held in Holešovice’s venue La Fabrika January 13th; 2014. 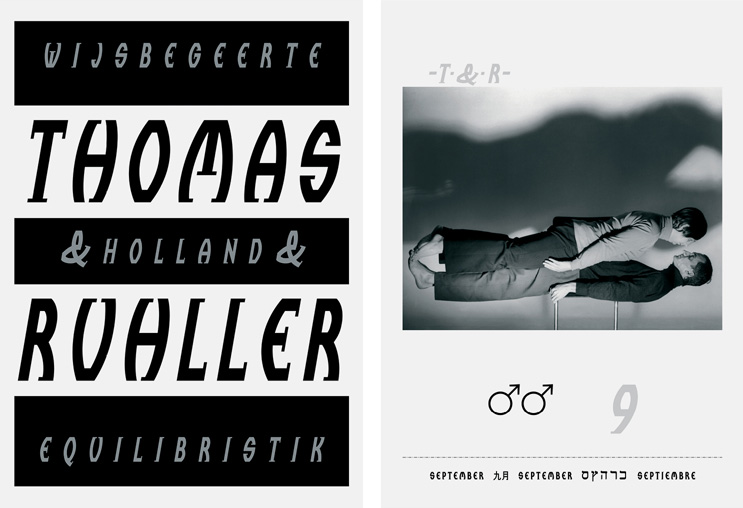 A calendar and poster for a Thomas & Ruhller performance tour, designed by Studio Najbrt; 2000. 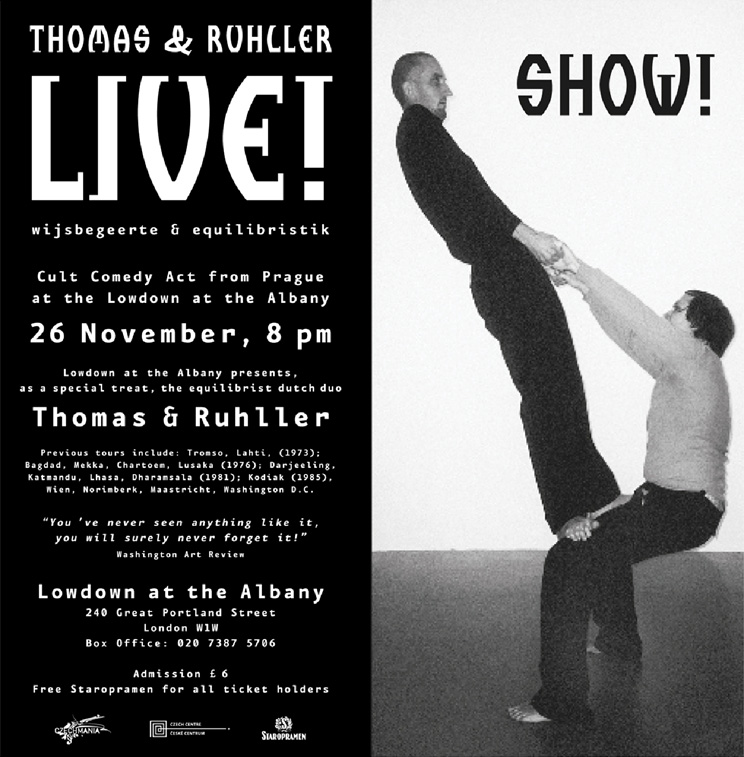 An invitation for a Thomas & Ruhller performance in London; designed by Studio Najbrt; 2000. 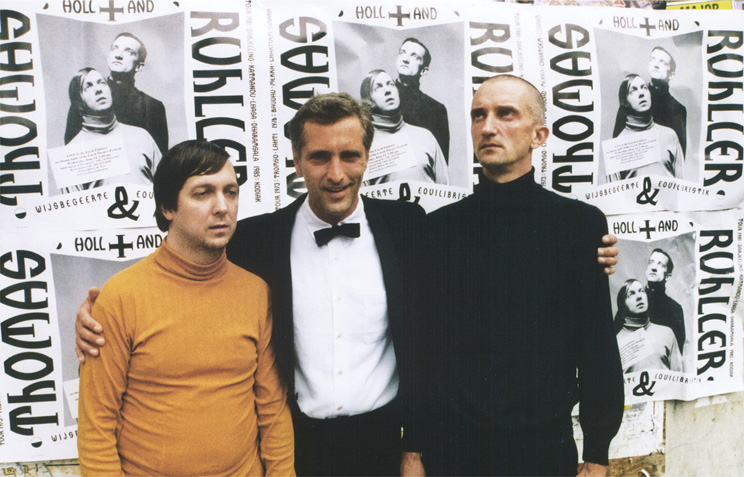 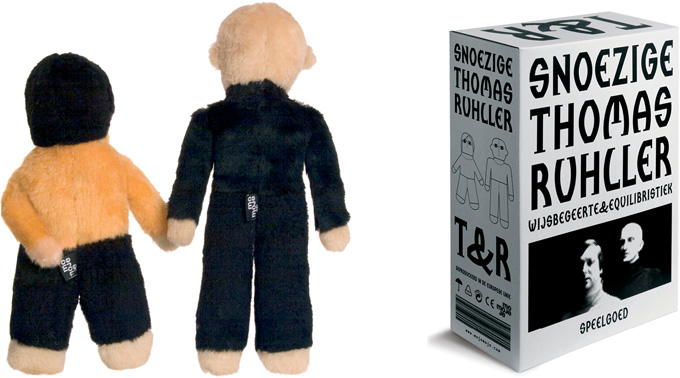 Equilibrists Thomas & Ruhller as cuddly toys for admirers and female fans. 25 and 30 cm tall; price for both: 500 CZK. Sold at mojemoje.com

Equilibrists Thomas & Ruhller will go with you to the mountains and prepare such moments there for you, which will be beyond your limits of expectation. Snowboard is exceptional with only ten pieces made in each series. Price: 18 000 CZK. Sold at mojemoje.com